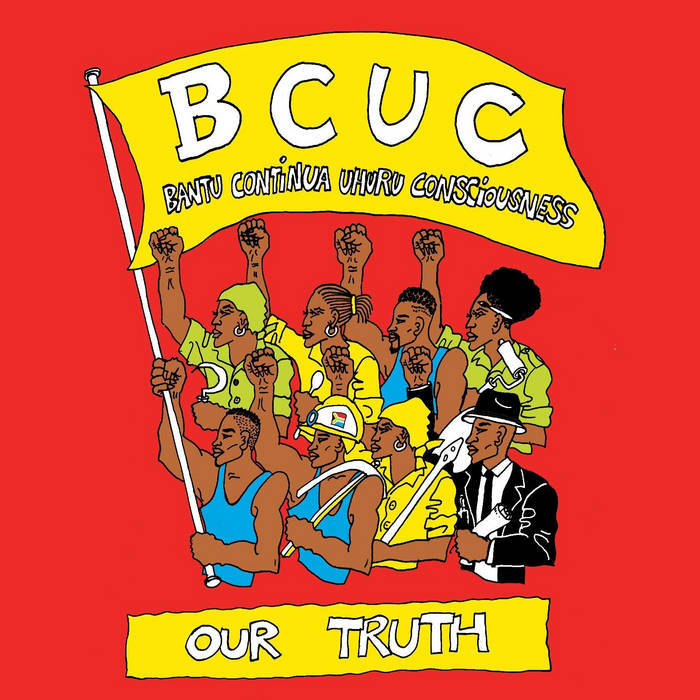 Lute FP Strip your mind of preconceptions and opinions and you will feel this powerful music. I couldn’t not have this in my collection.

Ex-Friendly The best live band on the planet right now wrapping up their essential trilogy in some style Favorite track: Yinde.

Acritarche There is a real urgency in this music and a real intelligence mixed with powerful and unparalleled african rhythms. Favorite track: Asazani.

Alejandro VZE The musical, linguistic, and textural richness on this record is huge! So progressive and contemporary and yet timeless in its energy and the sincerity of its message. Huge respect to BCUC! Favorite track: Yinde.

stuski Everyone needs this album in their life, it's the greatest thing I've ever heard.

Following their first releases, a tribute to the Zimbabwean songstress Chiwoniso ("Zvichapera”), a reissue of some South African library music from the early 80’s (« Music from Africa Vol.1 & 2 « – 2015) and a collabo between the Mbira master Jacob Mafuleni & the French electro-funk
producer Gary Gritness (« Atuka Mondhoro » -2016), the French record label is proud to announce another “off the beaten tracks” project with the 1st LP of the South African band

A stone’s throw from the church where Desmond Tutu organised the escape of the most wanted anti-Apartheid activists of Soweto, the BCUC band rehearses in a shipping container-turned-community restaurant, where their indomitable outspokenness echoes in a whole new way.

Make no mistake, this buzzing township has lost none of the creative, rebellious energy it had when the “Rainbow Nation”, with its now less-than-vibrant colours, emerged twenty years ago.

Like its elders, Bantu Continua Uhuru Consciousness sees its music as a hedonistic trance, but also as a weapon of political and spiritual liberation.

Artistic heirs to Philip “Malombo” Tabane and Batsumi, they seek to give a contemporary voice to the ancestral traditions of indigenous peoples. Jazz sounds of 1970s and ‘80s productions have been replaced by hip-hop influences and a punk-rock energy.

It all started about twelve years ago in a community centre workshop. The format of the band hasn’t changed much since that time, but its musical language has been greatly refined. While vocals and percussion have always driven their music, in the past they’ve explored “electronic”
avenues and for many years even included a rock guitar that swung between folk and free jazz.

BCUC found its magic formula in 2013, however, when they folded a frenzied electric bass into the simple drum-and-vocals mix.

And that’s the alchemy of “Africangungungu”, the name they’ve given to their “afropsychedelic” music. Both on stage and on this album (their first commercial production), their songs refuse to be formatted. Their “incantations” in Zulu, Sotho and English and their funky modulations
extend over twenty minutes in a whirlwind of sound reminiscent of Fela’s Afrobeat.

Nguni rhythms mix with Tsonga rhythms, the whistles of Bhaca and Shona miners meet the traditional Imbomu horn, while ancestral war songs and Ngoma busuku (night song) choruses mingle with the soul music of singer Kgomotso and the raging rap of Jovi and Luja.

“Yinde”, which opens “Our Truth”, means “the road”: a symbol of the distance left to cover towards a fairer South African society. Similarly, “Asazani” (“we don’t know one other”) pleads for a reconciling of all the components of the “Rainbow Nation”.

BCUC’s willingness to look these social and identity questions in the face has already led to the banning of one song from their only self-produced EP, which points the finger at a national idol. But neither this event, nor the criticism to which they are exposed by their refusal to belong to a specific movement, can change their minds. “Music for the people by the people with the people” – a people they refuse to box into one community, to circumscribe to one skin colour.

New sounds from Mavi, Ivy Sole & Moderator, plus AJ, the One joins the show, for her latest release